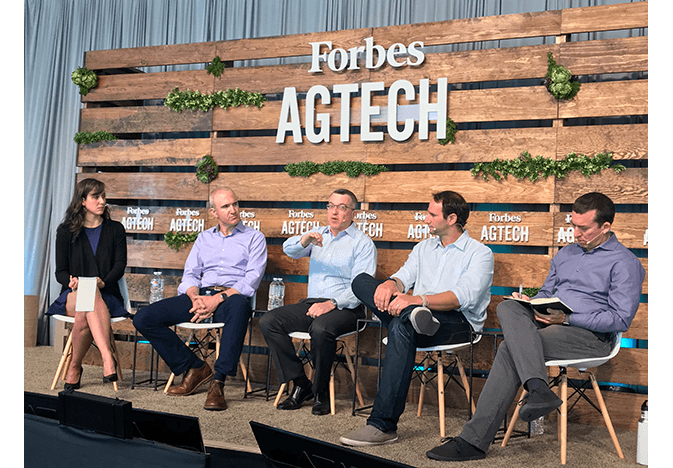 Greenhouse execs (from left) Matt Barnard with Plenty, Guy Blanchard with AeroFarms, Irving Fain with Bowery Farming and Paul Lightfoot with BrightFarms participate in a panel on the future of greenhouse leafy greens. ( Ashley Nickle )

SALINAS, Calif. – Executives with BrightFarms, Plenty, AeroFarms and Bowery Farming expect greenhouse production of leafy greens to continue to scale up in the coming years.

During a panel discussion June 28 at the Forbes AgTech Summit, they described an environment in which all signs point to greenhouse becoming a larger player in the leafy greens industry.

“There’s no more land left in the places where it’s economic to grow these high-value crops,” said Plenty CEO Matt Barnard. “Salinas is the most prolific environment to grow these crops in the world – there’s not an acre left in Salinas, and to the extent that it ever comes available it goes for $100,000 an acre …

“With the percentage of (U.S.) fruits and vegetables that are imported having risen to 35% from under 10 only a few decades ago, what’s clear is that demand is rising, and it’s rising fast,” Barnard said. “That demand can’t be served in places where it’s economic to farm because we’ve already maxed it out.”

The argument seems to have convinced investors, who have supported a flurry of startups focusing on greenhouse vegetable production. Bowery Farming CEO Irving Fain said the dynamic changed quickly.

“If you looked out maybe 5 or so years ago, there was a real hesitancy in the equity markets to finance businesses that required real capital,” Fain said. “It was much more about software businesses, social networks, applications, things that were cheap to build and could grow really large. You’re now seeing the capital markets actually say, ‘Hey, these are real problems and these are important problems …’”

BrightFarms CEO Paul Lightfoot announced during the panel that his company had just closed a funding round of $55 million, which will finance the construction of a national network of greenhouses.

It remains to be seen how large the sector will grow and how it will fit into the overall leafy greens industry, which is currently dominated by large producers in California.

“We have a brand, and our brand’s up there with brands of people that are in this room, but I think it’s early days and how we all end up working together as this industry gets bigger is yet to be determined,” Blanchard said. “We could be partners, we could be competitors. It’s too early to know.

“Over time, it’s going to be a bigger and bigger piece,” Blanchard said. “If I were a grower, I’d want to innovate. I would see what’s going on and think about, ‘How do I keep my relevancy in this market that’s changing?’”

Greenhouse companies see a number of advantages to their business model, including lower transportation costs, freedom from some of the food safety risks with which traditional growers must contend, and more control over numerous production variables.

They also see an opportunity to invigorate the leafy greens category with differentiated products.

“We get to grow particular varieties that are too finicky out in the field, that are really fun to eat in a way that consumers aren’t used to … “ Barnard said.

“It’s not a zero-sum game when you think of the shelf,” Blanchard said. “We can actually stimulate demand on that shelf by having new varieties and by having plants that are clean and pesticide-free and have tastes and textures that people haven’t tried before.”

Perhaps it seems a stretch to imagine greenhouse emerging as a fully competitive player in the leafy greens industry, but Fain referenced the history of innovation and how pivots in various industries have often taken people by surprise.

Others on the panel quickly pointed out that greenhouse producers have already established themselves to a degree that it shouldn’t be hard for people to take them seriously. Several are regular suppliers of a number of large retailers and planning for further expansion.