If you were inventing the farm today, why would you put it outside, on a giant plot of land?

OK, there’s the sunlight thing, but then you get droughts and frosts and plant-munching insects that have to be battled with harmful pesticides. And because outdoor farms need so much acreage, they’re usually far from most of their customers — which means that by the time a tomato gets to you in a city, it tastes like a baseball. 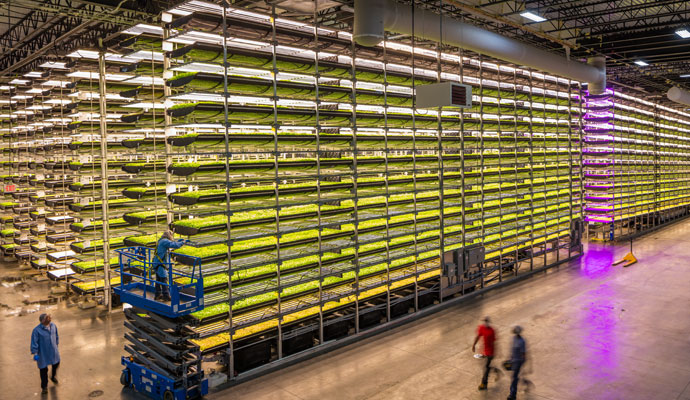 This kind of distributed farming fits with a larger 21st-century movement that venture capitalist Hemant Taneja and I call “unscaling.” We document the economic trend in our book, Unscaled: How AI and a New Generation of Upstarts Are Creating the Economy of the Future.

Massive scale was the goal throughout the 20th century. Mechanization and technologies such as the truck and telephone made it possible. Mass production, mass markets, and economies of scale ruled in every sector. So we ended up with giant companies, huge hospitals, big universities — and corporate mega-farms.

Today, industry after industry is unscaling. The cloud, mobile devices, big data, AI, and new technologies such as blockchain and 3D printing are making it possible to profitably customize products for smaller and smaller niches. Netflix is an unscaled version of mass-market cable networks like HBO, using data to make programs that appeal to specific types of viewers. Airbnb is a distributed hotel company. In an unscaled era, businesses can operate at smaller, more focused levels and beat giant enterprises.

So farms are unscaling, too. Bowery and AeroFarms both operate inside old industrial buildings in New Jersey and are a short drive from New York City. Inside these buildings, LED lights mimic natural sunlight. The crops grow in nutrient-rich water beds on trays stacked floor to ceiling. And sensors constantly monitor the plants and send data back to AI-driven software, which can learn what’s best for the plants and tweak lighting, water, and fertilizer to improve yields. Much of the “farming” is done by robots. “We get productivity hundreds of times greater than a traditional farm,” says AeroFarms CEO David Rosenberg. “And we use less water and no pesticides — because we’re indoors — and can grow 365 days a year.”

These unscaled farms can give consumers a better product than mega-farms, too. Food grown nearby doesn’t need to endure shipping — so it can ripen the way it’s supposed to. In the middle of winter, indoor-grown, local tomatoes will taste like tomatoes. As you can imagine, that’s what consumers prefer. 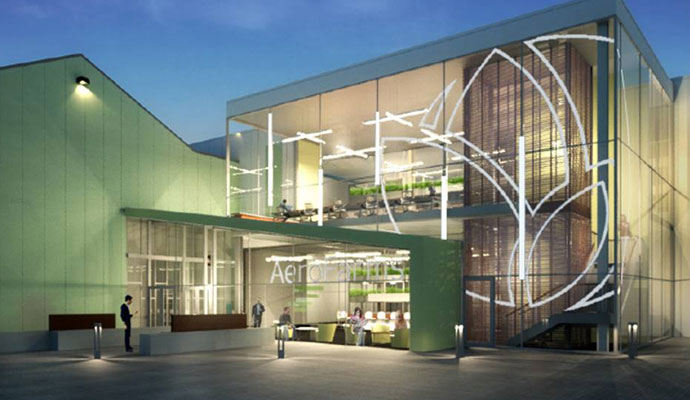 Since 2013, about US$2 billion has been invested in hundreds of agricultural technology startups, according to CB Insights senior analyst Zoe Leavitt, who spoke about the future of food at a recent Techonomy conference in New York. AeroFarms has raised more than $100 million and sells to Whole Foods and FreshDirect. Boston-based Freight Farms is growing food in container cargo vessels, often selling to restaurants, hotels, and college campus eateries. New York–based BrightFarms says it “finances, designs, builds, and operates” indoor farms close to food retailers and has raised $11 million in funding. Edenworks is operating rooftop greenhouses that grow produce fertilized by ground tilapia and prawns, which are also grown at the mini-farm.

Lettuce Networks is trying another approach. It is using cloud and mobile technology to create a network of urban farms. Founder Yogesh Sharma calls it an Airbnb for farming. The company contracts with owners of small plots throughout a city and installs sensors that can monitor crops and the surrounding environment. Nearby residents can subscribe to the Lettuce service to get food delivered. The system knows what’s being grown all around the city and, from that network, assembles a basket of local produce for delivery. Owners of the plots make some money off their harvest, while subscribers get an assortment of fresh food grown nearby.

Distributed, indoor, AI-assisted farming should be good news for the environment. Scaled-up farming was the right answer for the past century, feeding a burgeoning population while making food relatively cheap. The percentage of disposable income used for food is lower today than it was in the 1970s, according to Pew Research Center. But by 2050, the planet is projected to have 2.2 billion more people to feed, just as global warming is expected to make weather less predictable and dry up previously fertile regions. If food can be grown indoors, in a cost-effective way, in or near cities, climate will be less of a concern, and far less carbon will be burned moving food thousands of miles via trucks, trains, and ships.

Whether unscaled farming is a net economic benefit remains to be seen. It’s a new industry, with techniques and business models that are works in progress. Analyst firm Market Research Future notes that urban farms cost a lot to start (a warehouse in New Jersey is more expensive than a plot of land in Saskatchewan) and don’t yet work for a lot of crops, such as corn or bananas. Sunlight is free and sustainable; LED lights require energy. But proponents believe that because these indoor farms are far more productive and are closer to consumers, once there are a lot of them and the techniques and technology get honed, more people will be fed for less cost than ever before.

As investment pours in and environmental conditions drive a need for new solutions, unscaled farming looks a lot more like the future of food than does a massive field baking under the sun.